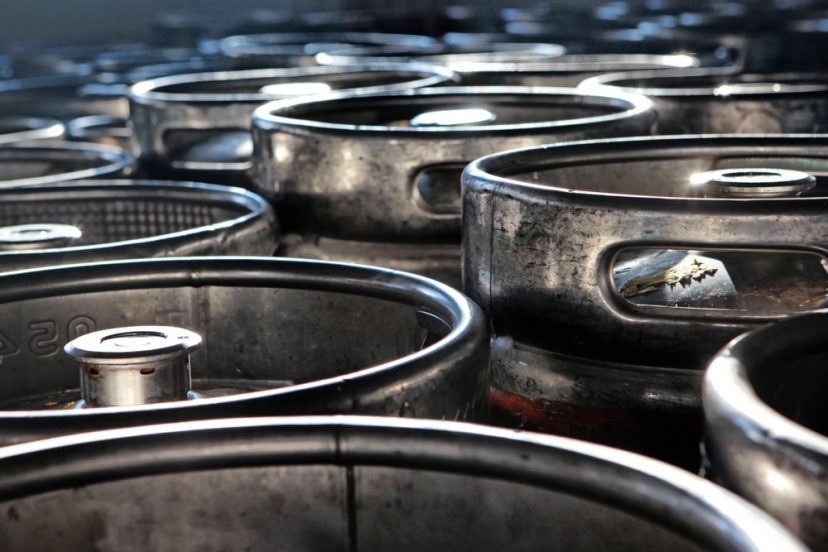 With craft beer becoming as sophisticated and diverse as wine, it’s not surprising to see craft beer being served in various sizes and types of glasses.  It also being bottled in a plethora of sizes.  We will hopefully answer all your beer measurements And beer sizes related questions:

When speaking about beer bottle size, you have to start with the unique Belgian tradition of large format bottling of beers. The mèthode Champenoise from the French cousins brings sparkle to wines, but it first brought bubbles to beer. Bottle conditioning is more common in Belgium than anywhere in the world. More conditioning means more bubbles, which means higher CO2 volume, necessitating thick big bottles.

The standard Belgian reference is the 750ml bottle, often used in the craft world as a showcase for specialty beer.

Double it and you get a Magnum, 1.5L, from the Latin words that means large. Often used for events, marketing campaigns, or celebration, it is not uncommon to find major brands that fill magnum bottles with cheap lager beers, but also traditional quality products like St. Bernardus Abt 12.

Quadruple the standard 750ml bottle and you have the big daddy, the Jeroboam bottle. The Jeroboam was named after the first king of northern Israel and assigned to the massive 3.0L bottle. Worldwide, the Jeroboam is the format used to celebrate pilots on the podium. In the beer world this bad boy is used from abbey and trappist brews for “grand cuvèè” or “reserve” editions, like the Chimay Grande Reserve. But wait, there’s more.

You feeling extremely thirsty, how ‘bout the 6L Methuselah bottle? Methuselah is believed to be the oldest person who ever lived, as referenced in the Old Testament, and has become synonymous with longevity. He lived for 969 years and died during the flood. Today the 6 Liters format is rarely used. It stands nearly 2 feet tall. Belgian brewery St. Feullien is one of the few that fill this huge bottle: their triple could be found in this 6L bottle and, incredibly, also in the 9L size! This last big one is Salmanazar, an Assyrian king that today gives his name to. This is the biggest bottle still used in the Belgian beer world.

How Many Ounces in a Pint of Beer?

One would think that a pint of beer is pretty self-explanatory, but not necessarily. Today having a pint is just vernacular meaning having a serving of beer. “How many ounces in a pint of beer?”, you ask. The answer depends on where you are. Historically the pint has been the usual serving quantity for draught beer in British pubs since the beginning of the 20th century. Going deeper, the pint is one-eighth of a gallon, and a gallon was originally the volume of 8lbs of wheat, but here is where the trouble starts.

By the 18th century a number of different “gallons” were used in Britain. Corn gallon, dry gallon, wine gallon, ale gallon, just to name a few, were all variations of gallons. In 1707 two different gallons were officially recognized in Britain by the parliament: the wine gallon, equal to 231 cubic inches (the traditional measurement) and the beer or ale gallon equaling 282 cubic inches.

How Many Ounces in a Pint? US vs. Britain

And in the rest of the world? Obviously, the country under the “influence” of one of these two kingdom have adopted also the same reference units, but if you go outside from the American or British area of influence, beer sizes change again due to the use of liter as unit of measure for volume.

More often than not, beers are served in glasses typical of the British pint, regardless of the internal volume. Each country with beer traditionally uses one or more particular “volumes” tradition. In Germany you can vary from a 200 ml “stange” glass, typically used with Kolsch beer, to a 1 liter Oktoberfest “Maas”. While in Belgium, it is not uncommon to find beers that are served in a single size glass, often something between 300 and 400 ml. Now that you know, be careful when you order a pint!

How Many Beers in a Keg?

The keg is a craft beer container legends are made from. From the ready-to-use 5 liter mini-keg to the 54 Imperial gallon hogshead, the choice is vast. As with pint glasses, each country adopted different container sizes for storing and caring beer, but some common measures tend to be similar.

How Many Beers in a Pony Keg?

On average we have the pony keg weighing in at approximately 7.75 US gallons. Pony Kegs have approximately 82 12 ounce beers. European use 30 liter kegs as standard for draught beer. So, how many beers in a keg like this? 83 bottles! But moving from country to country this number could change. In countries with wine traditions, where beer consumption is low, like Italy, France or Greece, keg sizes vary from 15 to 20 liters (3.9 to 5,3 US gal) and contain between 45 to 60 beers, while high-beer-consumer countries like the Czech-republic, Germany or Austria, typically use 50 liter kegs that contain 150 beers. Same question, different answers!

If we look at British traditions, we have to consider the cask history. The most important consideration is “real ale” which must be served at its prime, in the correct cask size to suit the volume. Historically breweries supplied their beers in a selection of cask sizes without price differentials per liter.

How Many Sizes of Kegs are There?

As time has passed, the available sizes have reduced and smaller and larger sizes have mostly been eliminated. Traditional cask sizes are all derived as fractions or multiples of the 36 Imperial gallon barrel, aka the “brewer’s barrel”.

Barrel (36 Imperial gallons / 160 liters), a half-century ago, most draught beers arrived in barrels, wooden ones at that, but now this large size is a rare sight;

Beer Diet Breakdown (How Many Calories in Beer?)

However you can’t have a beer measurements and beer sizes guide without these beer calorie and beer fat counts.

On Captain Cook’s ships, beer contributed as many calories to the sailors’ diets as biscuits (bread) and meat combined. Of course, the current meaning of beer in the diet has radically changed, however, beer offers many interesting foods for thought in modern health-oriented society. Too often in nutritional texts, beers are lumped together with one generalized compositional listing. It must be borne in mind, though, that beers can differ enormously in their composition, depending on their strength and how they were made, including the materials employed in the grist.

How Much Alcohol In Beer?

How Many Calories In Beer?

Speaking of calories, if we use a standard 355 ml beer as reference, beer could contain anywhere from 100 calories in a light-lager to over 250 calories in a weizen-bock. If compared with other foods, we find that caloric values ​​are no different from those of other large consumer products like potatoes or bananas.

How Much Fat In Beer?

On the other side, beer is essentially fat free. Conversely beer contains some protein, more than in other alcoholic beverages. The mineral composition of beer is related to the style. In general, beer is rich in magnesium and potassium but deficient in iron, zinc and calcium. Beer, if consumed in moderation, raises passions to an extent wholly unlike most other components of the diet. Moderation should surely be the keyword of our beer experience.

All the craft beer measurements and beer sizes can make your head spin. In the end, what is important to remember is that beer brings us together, no matter what shape or size.