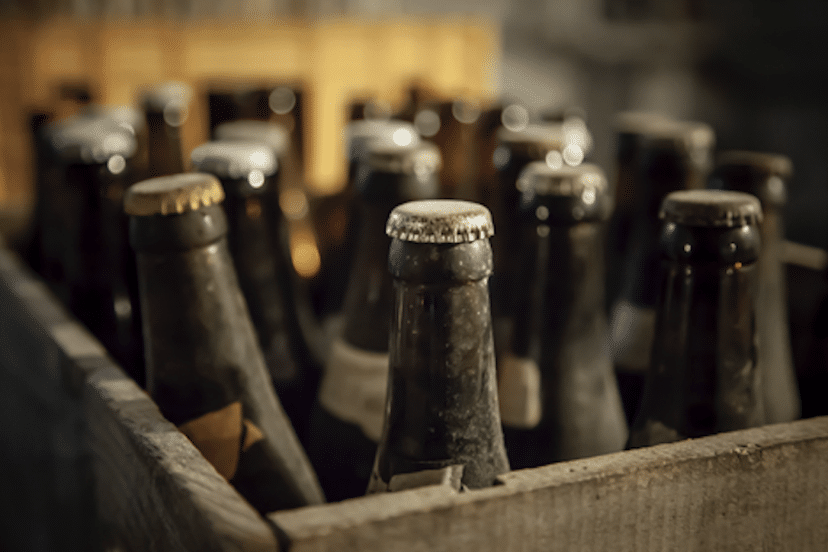 2021 is still a great year for beer aficionados. You can walk into just about any restaurant, liquor store, or bar to find a versatile range of beer. You can also check out our online beer store list and have your favorite beer delivered straight to your home.

Things get a little more complicated when it’s time to store all those beer cans and brown bottles. If you’re like us, you probably turn to online forums to seek advice on beer storage. There is no shortage of bizarre beer storage myths out there, and if you don’t carefully check out your sources, you could be getting lots of bad info. That’s all it takes to hurt the beer’s aroma and texture.

You bet it does! Which is why it is so important to make sure you have all the right information about storing beer. To save you the trouble of doing all the research, we’ve done the legwork for you and we’re presenting our list of six crazy myths about beer storage.

1. All Types of Beer Should Be Stored in the Fridge

This common beer storage myth simply isn’t true. Although the big three (Budweiser, Miller, and Coors Lite) taste delightful at an icy 40 degrees Fahrenheit, the same cannot be said about everything else. Most craft beers need warm temperatures to fully bring out their flavor. Not to mention the fact that cooler temperatures have a way of dulling your taste buds after repeated use, so it is better to have warmer temperatures for a better experience.

A general rule of thumb is ales, such as farmhouse ales, saisons or IPA’s should be served at a temperature between 45-55° F with an ideal temperature of 46°.

Barrel Aged stouts should be served at an ideal temperature of 52° and Lagers at 40-45° F.  Breweries like Side Project have tap lines that are calibrated to those exact temperatures to maximize the flavors imbedded within the beer.

The average kitchen refrigerators are too cold for storing beers, such as Imperial Stouts, IPAs, and other craft beer. Storing them in colder temperatures won’t harm their taste profiles, but you will have to bring the beer to room temperature before you could drink it- and that is never easy.

A better idea is to invest in a beer fridge that allows you to control the temperature, unlike conventional refrigerators. You can then choose the ideal temperatures that bring out the flavor in most brews, especially the ones with a higher percentage of alcohol.

Good thing for you we have put together an article with the best beer fridges you can buy. You are sure to find the beer fridge that suits your needs.

2. Beer Must Be Kept Cold At All Times

This is a huge misconception. Although most stores work hard to find the right temperature to preserve the flavor and aromas of their beer, you don’t need such cold temperatures at home.

However, you still need to find cooler temperatures. Once the fermentation process is complete and the glucose has finished brewing, the resulting product (beer) will begin its journey towards decay. This will inevitably lead to unpleasant smells and flavors.

The only way to reduce the rate of decay is to lower the temperature to keep the beer fresh for just a little longer. The trick is to tread the balance between maintaining the ideal serving temperature and ensuring the beer’s longevity. The influence of store temps isn’t all-too-important. Your goal should be to get your beer into a kegerator or a refrigerator as soon as you get it out of the store.

This isn’t true either. So, how does beer get skunked?

The primary cause of skunky beer is light, not heat. Skunked beer is the result of certain chemical reactions that release some of the sulfur compounds found in beer. This unmistakable smell is often compared to a skunk’s smell because they both share the same chemical composition.

Most brewers use hops in beer to varying degrees. If this is the case, then the beer would most certainly get skunky the moment it is exposed to the sun. The best way to increase the shelf life of your beer and avoid skunking is to store it in the dark. This is the only way to stop this process.

4. Beer Is Better in a Bottle Than a Can

Although beer connoisseurs appreciate the convenience of beer in a bottle, it has been shown time and again to be a less secure means of storing your beer. Remember the story about UV light we told earlier? Most translucent beer bottles are extremely impervious to light, which is the number one reason for the dreaded skunked beer. While brown bottles do have some safety measures in place, clear and translucent bottles are defenseless against the onslaught of UV light.

By contrast, aluminum cans provide a thorough seal to keep fresh air out, and they don’t let any light touch your beer. All types of bottled beer have tiny openings through which air can seep inside and wreak all kinds of havoc, most notably, oxidation of the alcohol content. Oxidation almost always leads to a stale beer, unless it happens to be a strong, dark ale that tastes better with age.

The simple answer is yes, beer can freeze! Reduce the temperature enough and you can freeze just about everything. Beer freezes at a lower temperature than water.

What Temperature Does Beer Freeze?

The rate at which your beer freezes depends on its total alcohol content. In most cases, beer will completely freeze at below 25 °F.

The storage area of the beer should not be allowed to reach freezing temperatures, or else you could end up with exploding bottles and cans. People living in colder climates should set the temperature higher than the beer’s freezing point.

6. Is Storing Beer on its Side Is a Good Idea?

There is much speculation that beer in corked bottles is best stored on its side, just like wine. The problem with storing the bottles horizontally is that it creates a yeast ring inside the bottle which doesn’t settle. This ring gives your beer bottle a ghastly appearance.  The exception to this rule is in the storing of lambics or gueuze.   These beers are most commonly stored on their side. This orientation expands the surface area of the beer that is in contact with the oxygen in the bottle. It also places the beer in contact with the cork.  Brewers like Cantillon and American counter-parts like Jester King and Allagash, store their American iterations of this style on its side.

By contrast, storing the beer upright lets the yeast quickly sink to the bottom. Besides altering the appearance of the beer bottle, yeast sediment also hurts the taste profile of your beer. Your goal should be to keep the sediment as far from the rest of the beer as possible.

Making the perfect craft beer requires hard work and a little science, and as the above article shows, it’s very easy to ruin all this by storing it wrong.

The shelf life of beer varies by beer type. For instance, most Lagers and Pale Ales last about a year before they go bad. Given that hops are the most delicate ingredient in brewing, beers that are reliant on a hoppy profile will noticeably lose potency within 3 months.  This isn’t technically, “going bad” but the muted hops isn’t what most consumers are paying for either.  These beers are best enjoyed as close to release date as possible. Sour beers and the Imperial Stout may last for up to 25 years. Most brewers can only give you a rough estimate about the shelf life of their beer.

Since breweries want you to consume their product just as soon as it hits the shelves, it isn’t uncommon to advertise a ‘recommended drinking date.’ This ensures they always have a steady supply of customers lining up to buy more beer only months later. The truth is that most beers will still retain their taste after the first month.

It is common for most beer connoisseurs to consume their beer within one year if its alcohol content is less than 7%.

Here are a few things you can do to ensure the end product is exactly how the brewery envisioned.

Should I Invest in a Kegerator for Beer Storage?

Yes! Kegerators are the ideal place to store beer because they usually come with all the hardware you need. A built-in pressurized tap system dispenses the content for your convenience. We have put together an article about – How to Buy the Perfect Kegerator – 4 Things to Consider. Although you will quickly grow to love your kegerator because of the convenience, you can make do with a refrigerator built for beers.

How to Regulate the Humidity Levels For Beer Storage

The ideal environment for beer storage is in a dark and cool room, but what about high humidity levels? If the humidity levels are higher than 70%, it could lead to mold. While this doesn’t directly affect the taste of the beer, it may result in the bottle caps getting rusted. This may give safe passage to ambient air as it makes its way into the bottle, tarnishing the beer’s taste.

In case of absolute zero humidity, the cork in beer bottles will dry out and crack once you open them. The ideal cellaring environment for beer is between 50% and 70% humidity. Here’s a smart monitor we’d recommend.

Can You Store an Opened Bottle of Beer?

No! Once the cork has been opened and the outside air has made contact with the alcohol content, it’s game over. It’s now or never because the beer will rapidly lose its carbonation. Make sure to drink the beer as soon as possible because it won’t retain its flavor for long. This rule applies to growlers and squealers too.

Make sure to regularly check into Best Beer Near Me to stay updated on what’s new on the craft beer scene. Also you can like our FB page, we’re always covering something exciting!

What is a Black IPA?

Black IPA is generally characterised by the Beer Judge Certification Program (BJCP) as a Specialty IPA.…

What is a Triple IPA?

Do you also feel overwhelmed by the many different styles of IPAs? Because I sure do.…

What is a Radler Beer?

So you've heard of the mysterious Radler Beer, and have been wondering what it is. Get…