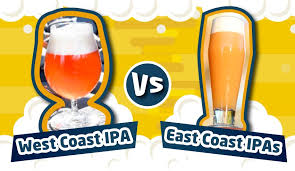 Bellied up to the bar and eavesdropping, I overheard a conversation between a customer and the beertender.  A conversation that I’ve heard many, many times at various bars.  A smartly dressed millennial bellied up to the bar and asked, “What IPA’s have you got?”  The beertender, offers him a local IPA.  I grabbed some pretzels and waited for the shit-show to begin.  Mr. ‘Karen’ takes a sip and spits it out, shouting “That’s not an IPA” in protest. The gizzled beertender, smirked, “It’s a West Coast IPA.”  In this scenario, the customer was so new to craft beer he has never come across a West Coast IPA.  He’s just used to the frenzied craze of New England IPA.

If you’ve ever wondered what the difference is between a West Coast IPA (WCIPA aka clean IPA) and a New England IPA (NEIPA aka Hazy IPA), this article will offer some insights into the differences and processes used to create the unique qualities of each style.

For this analysis, let’s start with Pliny the Elder, perhaps the most iconic example of a West Coast IPA (check out our article on Pliny the Younger). The first thing you’ll notice as the distinct difference of West Coast IPA v. a New England IPA is that West Coast IPA is clear.  You can see your hand pass behind the beer.  It’s a gentle haze.

Most commonly with West Coast IPA (WCIPA), the aroma strongly perfumes the adjacent air with pine and a bit of caramel; a stewed hop and a kilned malt that produces caramel notes, tiny bit of pithy citrus and a bit of bitterness.

You can smell bitterness.  The tropical fruit underscores the more traditional caramel/syrupy scents. What you will notice creeping across your tongue won’t pick be juiciness, instead there will be savory characteristics.  No orange juice.  No mango juice.  Bitterness is the goal of West Coast IPA. Pliny the Elder achieves this goal expertly. The finish is lightning quick.

With many WCIPAs you may start to want a bit of relief as there’s bitterness all over the palate.  As you drink more and more WCIPAs your palate develops a tolerance to the bitterness.  Much like fans of spicy food.  The more spicy food one eats, the more the palate craves more and more spice. As the palate gets used to spice, what was spicy is not as detectable

Another point of differentiation between West Coast IPA v. New England IPA was the bitterness battle. The thing that happened in the evolution of IPA is that there was a bit of a bitterness arms race as breweries were trying to out IBU each other.  Many breweries lost the plot with this.  I remember breweries ad campaigns daringly teasing consumers, “Are you man enough to handle this much hops?”  Balance was no longer relevant.  It’s a bit like a chef saying, “Are you man enough to handle this much salt?”  This reached ridiculous levels.

Mikkeler famously made a beer that boasted 1000 ibu’s.  By contrast, Pliny the Elder has an IBU of 100.  That beer virtually attacked your tongue.  It’s the flavor equivalent of getting kicked in the balls.  Things got way out of balance.  Around 2014 we saw a shift in the IPA culture.  The pendulum swung massively the other direction to a juicier, sweeter era of IPA…the New England IPA.

Now let us turn our heads toward the NEIPA, aka Hazy IPA. Julius has long been the gold standard of the NEIPA/Hazy movement.  Straight away you will notice a very different appearance, a different color.   The WCIPA enjoys a deeper color due to the roasted malt.  Here in the NEIPA there is more of a pale malt, honey malt treatment giving way to a lighter color and more biscuit quality.  There are more proteins in the malt to give it more head retention and more structure.

Julius has a noticeable presence of clementine woven between strands of strawberry and melon.  Most NEIPAs have noticeable juicy stone fruit characteristics, like peach or mango.  The finish with a NEIPA is much longer than it’s WCIPA counterparts.  The finish with Julius is ridiculously long and satisfying.

We’ve been conditioned to think that IPA’s are all about the hops; however, with the NEIPA yeast is just as important. The juiciness produced from the yeast is what keeps bringing the crazed beer fans. With WCIPA, the yeast is neutral with little to no flavor profile.  The yeast just ferments the beer.  With NEIPA, the yeast kicks out all of these stone fruit kinds of flavors that we associate commonly in golden ales or English bitters.

NEIPA masters underscore these yeast attributes with fruitier hop profiles.  It is a different approach to getting aroma and flavor into the beer.  NEIPAs are as yeast led as they are hop led.  A silkier body is fundamental to New England IPA, giving way to less carbonation than WCIPAs.  Where, WCIPA bitterness attacks the tongue, NEIPA glides across it with minimal bitterness.  This makes it feel more like juice.

Like the pitfalls of WCIPA with regard to bitterness, the NEIPA falls into the juice trap.  Ad campaigns would boast “the juiciest IPA on the market” and so the juice arms race began.  This unfortunately devolved into beers that became the beer equivalent of Capri-Sun.  The beer gets lost in the Kool-Aid.

So our friend, in the intro, expected a juice filled IPA and got a bitter IPA smack down on his tongue.  It was a total culture shock to his palate.  A bit like drinking a pine forest.  His brain shit a brick.  He was expecting to eat a bite of cool-whip only to realize that he’d taken in a spoonful of sour cream.  It discombobulated him.

So, how do these differences come about?  What brewing processes produce these divergent experiences?

We’ve explored how the yeast is different.  NEIPA uses a juicier yeast that leaves more sweetness behind as it doesn’t fully ferment out all of the sugar, while the WCIPA ferments as much sugar as possible, extracting sweetness from the yeast, leaving only a hint of it embedded in the caramelized malt.

Another difference between West Coast IPA and New England IPA is when the hops are added. Hops get bitter when they’re added at higher temperatures, a chemical conversion known as isomerization.  This is simply a molecule transforming into another molecule by rearranging the exact same atoms into a different configuration (ex. a-b-c molecule converted to b-c-a).

Hops added at higher temps convert the hop compounds into bitterness.  In WCIPA hops are largely added in the boil.  There might be a dry hop after or during fermentation, but the bulk is happening during the boil.  As a result, bitterness is being released into the beer.  The same principle as when you add tea leaves into the hot water.

If you add a tea bag into cold water, not much is going to happen.  With hot water, you notice the conversion of water to tea.  With the NEIPA, the hops are largely added at the back end of the brewing process.  Some hops are added after the malt is dissolved, but before temperatures reach the boil. This is done to extract some bitterness for balance, while maintaining the hops’ structural integrity.

Another step is NEIPA hops are added during active fermentation, around 70 degrees, activating bio-transformation.  This is the interaction of hop oils with active yeast.  Something that is living, the yeast breaks down chemical compounds, hops.  The yeast is not only attacking the sugar, it is cutting down the hop compounds, creating new flavors which explains the fruity characteristics, known as esters.

It is the same principle as composting; a breakdown of the biodegradable waste that transforms into fertilizer.  A final step, is cold crashing which is the practice of improving the beers clarity while being transferred out of fermentation, which involves lowering the temperatures very quickly to and holding just above freezing for about 24 hours.  During cold crashing, NEIPA brewers will add a crap-ton more hops.  This step helps produce the coveted aromas of hops without the bitterness.

If you want to learn more about the difference between West Coast IPAs and New England IPAs or any other style of beer, take a look at our article Different Styles and Types of Beer: The Ultimate Guide.