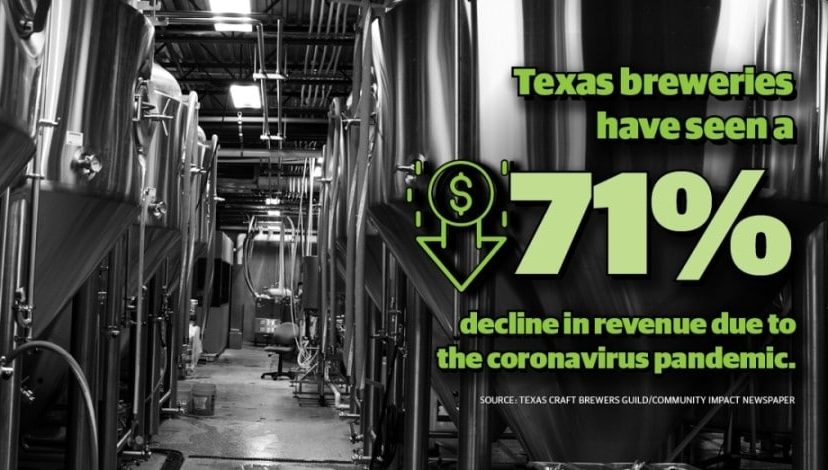 Pubs, breweries and taprooms are living in really dangerous times financially.  They are losing money and government support and are dancing intimately with the fickle whims of capitalism.  The craft beer industry is in desperate need of a bailout. Sales, nationwide, are down roughly 30%.  In Texas, a state notoriously anti-craft beer, has seen over 70% decline.  Many of our favorite breweries are on the brink of financial collapse and need help.

In 2008 the government offered the banking industry a bailout.  Trillions of dollars were given to the very ones who brought our world to the edge of financial devastation.  Here are 4 ways we can help bailout the Craft Beer.  It has never been more important for us to support craft beer and independent, ethical businesses.  We here at Best Beer Near Me have been doing our part during the lock-down.  We have bought a crap-ton of beer.  While buying is important, there are other ways that we as a community can help.  Here is how you can help independent craft beer businesses.

Let’s face it, we’re all feeling the financial crunch and we only have a limited amount of money.  Wiser spending practices are necessary.  So how do I make the most of my spending dollar?  The first of the 4 ways way we can help bail out the craft beer industry, is to buy independent. Prior to the pandemic, we were seeing a full court press from big beer to buy up independent craft breweries.  It started with Goose Island and then the dominoes began to fall as Ballast Point, Breckenridge, Karbach and many others followed suit.  Now that small businesses, craft beer in particular are in a vulnerable position, big beer giants are lurking like lions tracking a wounded gazelle.

In London alone, which at one point was almost 100% independent, fell to just a fraction of that number in 2020.  Make no mistake, with people struggling to pay a mortgage, the opportunity to bail themselves out by selling, is a lifeline too good to pass up.

We are also seeing a trend of big breweries supporting local pubs by sending these pubs lots of money to stay open and by purchasing equipment for these pubs. Noble, yes; however, on the backside of this practice, tap lines are being tied up with big beer and their subsidiaries, which squeezes out opportunities for independent breweries to get their beers on tap.  So the first of the 4 ways to help bail out the craft beer industry, is make sure we only buy independent.  This is the primary way to bail out independent beer.  If we want to remain a part of a scene that has wonderful, fresh and creative ideas, it is critical to buy independent.  The scene will stagnate and homogenize, if we do not.  To know for sure which breweries are independent, look for this seal.

Way Number 2: Give Feedback to the Brewery Directly

So, after clearing hurdle one, supporting independent beer, what happens if the independent beer sucks.  Just because it bares the independent seal, that is not a guarantee that the beer will be good.  This can be for a variety of reasons, it may not be properly cared for, not properly stored or not properly poured.  We live in a ‘Karen’, yelp, Untappd’ reviewing culture and those opinions are out there forever.  It can really tarnish small business.  Rather than leaving a review, reach out to the brewery.

The 2nd of the 4 ways to help support craft beer is to let the brewery know your feedback directly; however, if you insist on anonymity and are going to leave a review anyway, make sure it’s helpful and balanced.  Too often, reviews are “I don’t like sour beers, 1 star” or “not my cup of tea” 2 stars.  It’s not helpful to review a beer style you don’t have an appreciation for.  I’ve seen, “this beer is stale” 1 star.  If it’s oxidized it’s not a fair representation of what that brewery can do.

Reach out to the brewer, it’s not necessary to tell the world.  People underestimate how influential these review sites are.  Many of the hype-beers are hyped because of these review sites.    The downside is, that there are 40,000ish breweries in the world who produce fantastic beer that don’t find themselves at the top of Beer Advocate or Untappd’ review list.  It doesn’t mean that their beer isn’t as good.  Many times, they are better, they have just flown under the radar for some reason.

Way Number 3: Resist the Hype and Try Everything

Another good practice to help bailout the craft beer industry is to research your breweries.  Don’t just go on the buzz.  Trust me I’ve been guilty of this.  Some of the hype is earned, some I left scratching my head about.  Buzz doesn’t equal good.  By drinking craft in this manner we are not being independent in our thoughts, we are still relying on the insistence of someone else telling us what to try.

As someone who works on the fringes of this industry, I understand and am guilty of being seduced by the lures of being in the know, having the skinny, being on the inside.  Sometimes that quest is driven by hype rather than a true search for the best beer.  A really important, hard truth of beer is, we listen too carefully to someone telling us this beer is trendy and this beer is not.  I nerd-ily scour secondary market values to find out what is gaining steam.  As if this practice isn’t completely arbitrary.  At the end of the day, I’m listening to someone telling me to drink that beer.

So how do we deal with unconscious bias? Do your research and spread your buying around.  Go on your own personal scavenger hunt to find little hidden gems.  Throughout the lockdown, I sought out breweries I had never heard of.  That is how I discovered St. Elmo in Austin and Marshall Brewing in Tulsa and False Idol in North Richland Hills Texas.  If I hadn’t spread my buying experience around, I never would have found these delicious and diverse beers.  They have absolutely fantastic beers without a lot of reputation.  I wouldn’t have discovered False Idol’s ‘A beer About Nothing’ which is absolutely delicious.  Try and divorce yourself of checking with Untappd’ before you try something.  Try first.  Evaluate your own impression of what you’re drinking.  Gather all the information you can and make your own decisions.  Use your own voice.  Don’t merely drink independently, think independently.

Way Number 4: Buy From Breweries who are Environmentally Ethical

The 4th of the 4 ways to help bailout the craft beer is to buy ethically. Many of the breweries in the industry are following sustainable and environmentally safe practices; however, many are not.  Many are using one way plastic kegs, unrecyclable malt bags.  Many are importing hops and yeast from all over the world.  It takes 11 liters of water to make 1 liter of beer.  Craft Beer is an enormously wasteful industry.

If the goal is for the industry to be safe for the world and to be financially profitable and sustainable, our buying dollars need to be directed to those who are mindful of minimizing the waste.  Jester King is a good example of a brewery who grows their own ingredients, produces their own fertilizer, and have invested heavily in becoming 100% self-sustaining. To help from a consumer stand point, we need to consider buying more locally.  To expand on this point, buying from breweries who use local ingredients and champion the breweries who do it.   While the craft beer culture is embedded with lots of negativity and snobbery, the one positive thing we can do is offer our full-throated support to those who do things the right way.  Also, craft beer needs more diversity.  Support those who invest in this practice.

There you have it, 4 ways to help bailout craft beer. I hope this article helps provide a bit of guidance on what little ol’ you can do to help bailout the craft beer industry.  These guys desperately need our help.  Buy Independent.  Think independent.  Buy a lot.  Spread out your buying.  Support sustainable practices.  Cheers.