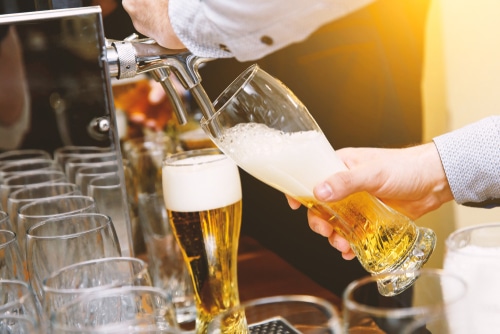 Cream ale is smooth, easy to drink, and ideal for the hot months. One thing to keep in mind is that they are not made with milk products. These ales are cold to fermented to give them their silky mouthfeel.

Cream Ales are often compared to a German Kölsch beer; however, there is a noticeable lack of fruity esters compared to cream ale. A cream ale style is brewed like ordinary ale, held in colder temperatures like a lager, fermented like ale, and lager beer. This made Cream ale taste in-between ale and a lager beer.

A Brief History of Cream Ale

Germany’s immigration to the United States in the late 19th century expanded the popularity of lager and pilsner beer styles in the United States. As a result, brewers in Northeastern states keep up with lagers beer. Cold-fermented ale, referred to as present-use ale, was supposed to be consumed quickly rather than sit on the shelf through experiment.

However, in 1840 American brewers established cream ale to compete with the popularity of European-brewed lagers. Those early American brewers made lagers with a little more flavor by taking the core profile of lagers and enhancing it.

When it came into existence and was classified as an American-style beer invented in the United States. With more of an interpretation of English Milds and Bavarian Lagers.

What Makes a Cream Ale?

Even though it’s called Cream Ale, it doesn’t include dairy or lactose. A Milkshake IPA is not an example of this style of beer. Ale, despite its name, is more closely connected to a larger. Using the word “cream” as marketing jargon may be referring to the beer’s velvety flavor and richness.

Taste: Taste-wise, this beer style is very much like the plumper Kölsch and sometimes uses maize to add mouthfeel. In terms of flavor, the ale is light-body, pale because it is brewed with lager yeast. The corny flavor is not overpowering, with a mild maltiness and sweetness. Malt and hops don’t rule the roost. Dry, but with a hint of sweetness.

Aroma: It is sweet and corn-like, with some fruity esters, low malt overtones, and a low hop scent.

Appearance: light straw to a moderate golden hue. Low to medium head, high carbonation, and some sparkles of clarity.

Why Is Cream Ale So Popular?

These ales are easy to drink because they have a light body. Pale malts and sometimes flaked corn lend nicely to pairing with salty bar cuisine or as a post-workout reward. This piece conveys an air of regional identity. It has a hazy past, yet it’s a treasured possession for many.

This ale is crisp like a light pale lager, yet with the scent of ales. Treasure is pale in color, high level of carbonation, and is more hopped than a typical light lager. For a more lightweight body and a softer palate than Kölsch, cream ale is the best option. Best renowned for their light, pleasant, and drinkable qualities.