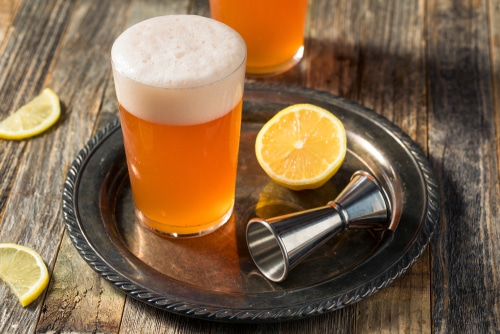 What is a summer shandy? The shandy, short for shandygaff, is a refreshing summer beverage. It’s delicious, simple to create, and a great way to drink your favorite beer on hot days. You will also be served a drink with less alcohol, allowing you to participate in other activities.

A shandy is just a blended drink of beer and lemonade. It is a popular method to dress up a standard glass of beer, especially in the summer. The typical shandy is made with equal parts beer and lemonade, though the amounts might vary. When mixing with a wheat beer, you may want to use less lemonade, while mixed with a light lager, you may want to use more. The preference will be a question of personal taste and will most likely vary depending on the style of beer.

Germany has a version of this beer cocktail called a radler which literally means “cyclist”. Its narrative begins on a hot day with 13,000 thirsty Bavarian bikers and the owner of a drinking establishment who didn’t have enough beer to go around, so he got creative and blended it with leftover lemon soda he couldn’t get rid of.

One of the greatest methods to make a nice shandy beer is to start with those light, pleasant beers you prefer in the summer. The greatest shandies are made with wheat beer and light lagers. Pilsner is a popular shandy base as well. If you enjoy a hoppy IPA, a lighter one with a shandy is alright, but a dark beer or stout probably wouldn’t work. The flavor of the shandy is all about simplicity, but if you’re up for a challenge, you can spice things up by adding a few drops of cocktail bitters.

Brewers have become increasingly popular in recent years by releasing a summer shandy or radler beer. Many of them keep the lemon flavor of the shandy recipe, while some use grapefruit or other citrus fruits instead, and some add ginger for a wonderful contrast. You can experiment with them to see if they match your own mixed ones at home.

Shandys (or radlers) fall within the fruit beer genre.Their scents and flavors are linked to the type of fruit(s) used in the mix. The fragrances and tastes should be pleasant and supportive, rather than artificial and overpowering, and free of defects like oxidation. The prominent fruit(s) and the underlying beer style should be balanced in a proper fruit beer. The fragrance of hops, yeast by-products, and malt components of the underlying beer may be less noticeable when fruit is present. These components (especially hops) may be intentionally subdued to allow the fruit flavor to show through in the final presentation. Depending on the base beer, their appearance and mouthfeel will differ.

How Many Calories in a Summer Shandy?

I would tell you about 110-130 calories in a Summer Shandy. I say that because you typically make with a lighter beer that runs on average around 100 calories per can. But lemonade can have 130-150. If it is a half and half you do the math.

How Many Carbs in a Summer Shandy Beer?

How many carbs in a Summer Shandy is the same formula for how many calories. Half the amount of carbs in your beer and half the lemonade’s carb count. So I’d guess (Lemonade 36g, beer 12g / 2) 24. carbs in a summer shandy.

Don’t be scared to serve these cocktails alongside some food. Shandys pair well with pulled pork or other hearty meats because the crisp citrus notes cut through the fat. Since they’re so refreshing, they go great with spicy foods like hot curries, spicy wings, or Sichuan cuisine. They can also replace mimosas at a boozy brunch.