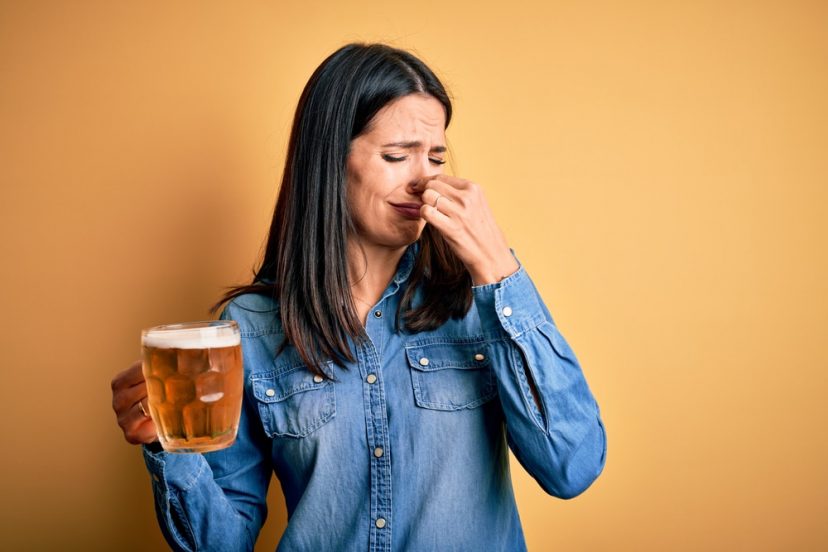 Have you ever had a beer that’s been sitting in the back of your beer fridge for what seems like an eternity? Is it still good? Does beer go bad? Well, yes…sort of. But the answer is nuanced. Beer doesn’t go bad in the sense that it is bad for you. Beer won’t spoil like milk, but it will become flat or stale. It will lose freshness. This is very noticeable in hoppy beers or lighter beers like lagers or pilsners. Chemical breakdowns start to produce skunky notes. You will begin to notice a musty, cardboard kind of flavor as the beer loses its potency and loses many of the things that make it delicious as time passes.

In some cases, beer becomes infected.  This occurs when wild yeast like brettanomyces or wild bacteria like lactobacillus or a combination of other bacteria are introduced into the beer. Don’t worry about getting sick, these wilds won’t harm you, but it can sour sour, smelly feet, rancid characteristics to it. Not technically bad for you, but certainly not delicious.

I hate to sound like a broken record, but beer bottled or not will lose potency, but will not spoil. Exploring what a bottle does for beer can be helpful. Beer doesn’t like light. That skunky smell and taste occurs due to a phenomenon known as “light-struck” beer. This skunking happens when light sensitive hops are exposed to light. Brewers have been battling this chemical reaction since the 1800’s. Most brewers bottle their beer in dark brown or green bottles to avoid this disaster. While a skunky ale or lager is not very palatable, it won’t make you sick. Light-struck reactions are most prominent in delicate beers such as pilsners. when you pour from bottle to glass, make sure it’s not exposed to direct sun light. Even moderate exposure can start this chemical reaction.

Will Canned Beer Get Skunky?

The short answer is no. Light is the essential ingredient that skunks your brew. Off flavors can occur by storing beer in climates that are too warm. This is accelerates the loss of potency. Warm storage is damaging to the flavor, but it won’t skunk. Hops begin to take on a cardboard -like flavor that is not satisfying. Barrel aged beers will take on a soy sauce quality if exposed to warm storage for too long or from changing storage temperatures frequently.

Conversely, barrel aged beers such as sours and stouts actually mature in flavor over time. They will eventually lose potency, but they have a much longer life-span. Our article Should I Age My Beer – Do’s and Don’ts  gives some guidance on flavor maturation. But Father Time is undefeated and even the most potent barrel-aged stout can take on a soy-sauce quality or a barrel-aged sour can take on an acetic vinegar-like quality, if aged too long.

Why Things Taste Bad – The Science

Our tongues are biologically engineered to respond to certain flavor generators such as sweet, sour, salt, bitter and umami. When our tongue encounters an off-flavor it sends out a warning that something is possibly rotten or toxic. Often when something “bad” hits our tongue we experience an excessive bitter taste. Biologically this helps us distinguish good foods from bad.

Beer is made of barley, water, hops and yeast. Before brewing, barley germinates, allowing it to make the enzymes that provide our sudsy beverages with its flavor. Some of the enzymes contain sulfurous compounds.

Hops, when boiled, release all kinds of compounds. Co-humulone, ad-humulone and humulone. All 3 are a variation of an alpha-acid. These are relatively tasteless until heat is applied causing a chemical change. These changes are what give hops their bitter/flowery characteristics. The science behind it is such that the compound changes from a 6 compound ring to a 5 compound ring. In practical terms this means, the longer you boil the hops the more bitter the brew will be.

The alpha acids can break down according to a reaction known as norrish cleavage. It is driven by the isohumulones absorption of light. If you leave suds out in the light too long the norrish cleavage leads to molecules known as mercaptans which give skunks’ spray its odor and gives old barley resin is sulfuric characteristics. Our tongues are extremely sensitive to this off-flavor.

So, does beer go bad? Well you get to be the judge.

What is a Black IPA?

Black IPA is generally characterised by the Beer Judge Certification Program (BJCP) as a Specialty IPA.…

What is a Triple IPA?

Do you also feel overwhelmed by the many different styles of IPAs? Because I sure do.…

What is a Radler Beer?

So you've heard of the mysterious Radler Beer, and have been wondering what it is. Get…