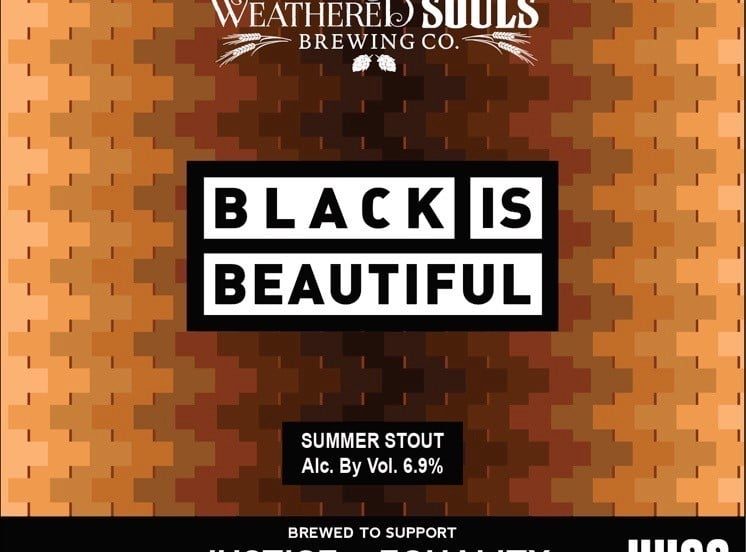 If you’ve even had a passing interest in craft beer, over the last 2 months you have probably seen the collaboration beer, Black Is Beautiful, available at your local brewery.  This collaborative effort was spearheaded by Weathered Souls Brewery’s co-owner Marcus Baskerville.  To date, just over a thousand breweries world-wide have joined the collaboration dedicated to raising awareness for the injustices people of color face daily.  Those who participate in the collaboration must donate 100% of their profits to a Black Lives Matter’s charity of their choice.  So if you run across a Black is Beautiful beer, do the right thing, buy one.  They are delicious and our brothers and sisters are hurting.

I, like many, after witnessing the final 8 minutes and 46 seconds of George Floyd’s life, felt such a profound sadness that pains over the wide gulf between what our brothers and sisters desiderate and what they deserve.  And I, like many, engaged in much needed conversation with friends and colleagues about racial injustices and need for reform.  And I, like many, have not done much more than talk.  While I may have marched in a few protests and joined social media initiatives and signed a few petitions, other than symbolic gestures, what have I really done?  It has made me introspective to my complicity in the systemic racism that exists.

How Black Lives Mattered in the Constitution

The founders of our Constitution left a lot of people out.  They left out poor people and black people.  The constitution of our country evaluated one person as 3/5 the value of another person.  While this standard was repealed in the 13th amendment, the history of our country is a continuous struggle to extend the liberties promised in our Constitution to everyone in America and it is painful to see the gap that still exists.  The functionality of the American system was built on the idea that money meets money, interest fights interest and only the strong prevail.  The desperate plea of an angry and chronically traumatized black culture that screams “Black Lives matter!!” has far too often been met with the disconnected reactive defense that “All Lives Matter!!”  Of course, all lives matter, but shit rolls down hill and those at the bottom are drowning in it.

What have I done to combat these entrenched racist systems? Nothing.  With complete transparency, I’ve done nothing beyond a few mental ascents.  The sting of that realization burns.  The conservative culture I grew up with, hid behind the veil of the “I don’t own any slaves, so I’m not to blame for slavery?” ad hoc argument. A sentiment that shielded us from fully realizing that if the same systemic racism that exists today, exists tomorrow, we are to blame:  nevertheless, I do recognize that it is difficult to start something new with this history of yesterdays buried within.

HOW BLACK LIVES MATTER IN THE CRAFT BEER COMMUNITY:

While there is a large progressive population in craft beer, there is still a significant lack of representation of people of color.  According to Brewbound, there are 8,275 breweries in the United States, of that number just over 60 are owned by African Americans.  The subtext seems to whisper something that is unwelcoming to people of color.  I have been to over 100 breweries across the country and can barely recall seeing a single black person at any of them.  What is the most troubling part, is that I didn’t immediately notice it.

Our shared craft beer culture needs to examine why it looks like the place where white people were invented.  Is it because black people don’t like beer?  Why is it that they are not drinking, making or selling beer?  I have such a longing to move beyond this passive acceptance to unearth what is fundamentally unwelcoming within our culture.  But I find myself unable to see a path due to the cataracts of privilege.  My eyes have grown so accustomed to this narrow sight that they have armored themselves against wonder.

The answers are likely not nefarious, but nuanced and multi-faceted, from beer’s colonial roots to exclusionary marketing campaigns to craft beer’s price points.  The craft beer industry celebrates its independent sensibilities, as they wage their collaborative protests against big beer, forgetting that one can only wage these oppositions if they have the means to do so.

These brewers required assets, credit, backgrounds in business or financial planning and the benefit of the doubt.  Many brewers have degrees in chemistry and have MBA’s and other white collar privileges.  That is not to say that craft brewers and owners don’t work really hard, I’m merely pointing out that this is just the ante to get in the game.  To play a hand.

The black community has been systematically excluded from these growth opportunities through the attenuated effects of policies designed to deny them financial stability found in property ownership and affordable rental housing.  The systemic disadvantages that exist today, need to be reduced tomorrow.  Our brothers and sisters wear these scars like medals.  Black Lives Matter.  That is not a cry for division, it is music.  It is a dark melody reminding us of terrible things.  I say it now as a prayer and as regret.  I say it in a whisper and I say it as praise.  Black is Beautiful.

Below is a list of breweries owned by black men and women.  If you happen to find yourself within the vicinity of any of these breweries, patronize them and see for yourself, what these skilled brewers and owners have to offer craft beer.  You will definitely find yourself able to purchase a Black is Beautiful beer somewhere in your travels.  Buy one.  Not only are they delicious, it’s needed.  Thank you Marcus for launching this campaign.