I have wrestled with exactly how to write this article. Ordinarily, I extol the virtues of the breweries I visit. The beer. The vibe. The personalities. The smell of fermenting wort lingering around like a crepuscular cloud. The conversations. The hipster beards. I wrap myself in these experiences like a warm blanket. Breweries are my comfort food. My love language.

My experience at Vector left me waste deep in shame, feeling my muscles strain under the weight of self-doubt. It’s a feeling I’ve felt many times before. A feeling that knifes into my tissue, tearing the thin membrane that separates my goodness from my inexhaustible need. The pain of the mind is a terrifying place. An awful state to survive.

My paper-thin skin offers little resistance to the threat of those who see my vulnerability. Wariness is my default position when in the palm of someone else’s hand. Someone I barely know can bury me. Even my beads of sweat warp from the intense gravity of unwanted perception. It exposes an ugliness that I can’t see. Lurking under the skin is the face behind the mask. This pain always invites me to look deeper at the gnarled roots under the surface. I sit here struggling how to write objectively while feeling a river of spite dragging my motivation with the current. I feel like a self-entitled Karen wagging my privileged finger condescendingly at those who dared to make me feel. 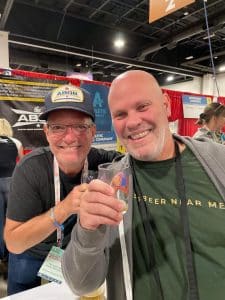 One brewery caught my attention as a local buzz was starting to bubble in the DFW beer community. Vector Brewing was happening, and endorsements were staining the pages of Instagram. Selfies and artistic establishment shots of beer and pizza and good times were invading the Dallas area social media accounts. I had just started the Texas Beer Run, so I added this brewery to my priority list. As I started this sojourn, a strange thing happened. While setting sail to travel the wide boundaries of a boundaryless state, I got lost inward.

To raise money to support independent breweries like Vector, I had launched a campaign called the Texas Beer Run. The general idea is that I will travel to every brewery in Texas and post my adventures on social media as a running journal. The emphasis is to raise funds for CraftPAC, a political action committee that serves the interests of independent breweries in Texas. Think of me as a less talented, more introverted, and fatter Anthony Bourdain, but for beer. To date, I’ve traveled to approximately 80 breweries. You can get a glimpse of them on my Instagram account or right here on www.bestbeernearme.com.

To be honest, much of the Texas Beer Run is self-serving. It’s a way of giving myself importance, as if that is a thing one needs to be given. We all want to matter but fail to recognize that we already do. It’s not something that must be earned. My value isn’t because of WHAT I am, but THAT I am. Far too often I impose upon others to fill this hole of self-doubt with validation. A job far to labor intensive and demanding to do for free. The G-Force of my neediness wilts relationships and crushes goodwill.

I entered through the doors of Vector Brewing with the best of intentions. Sample the beer, taste the pizza, interact with the people and atmosphere. Get good footage to give readers and followers a good sense of what this place is all about, encourage donations to a worthy cause. Promote Vector as a place worth coming to. Drive customers to a worthy independent brewery. Gain favor from the brewer and the brewery staff for my incredible act of selflessness. To be seen the way I wanted to be seen. Then it happened. A familiar buzz to the brain like pain seeking muscle memory. An unwanted reflex that takes me back there. There where the seeds of shame were first sown. A garden of all the pain I carry with me. A place where my body catches fire and searches for every reason to hate myself.

“Sir, what are you doing?” was the question, the bar manager asked me. I had heard this question before, delivered much more rhetorically and with much less regard. It was a question my mother used to ask me right before bequeathing her disapproval. A gift that came wrapped in a rageful, perfectionistic package.  It was a question that did not want an answer and every time I heard it, I would feel like a failed experiment. A weight sits on my chest and the words I try to speak get caught in my throat. My sore throat choking them back every time. It’s a horrible space in my head that leaves me poking at my wounds, trying to tell myself not to do anything stupid. Just let all the salt in my blood dissolve into this ocean I’ve become.

“What are you doing?” he asked again with more condescension. “I’m gathering footage for my website.” I said with the resolve of a suspect sweating under a lamp. Attempting to make him regret his line of questioning, I flexed: “I’m visiting every brewery in Texas to help raise money for CraftPAC and support breweries like yours.” Surely, he would notice that I am a saint, a martyr above reproach. “Ever think of asking?” He replied without an ounce of guilt. My passive aggressive counterstrike wasn’t working. An odd cocktail of shame and rage began to bubble from deep within.

I felt a connection to the volcano that simmered within my mother, as if she and I shared the same fault line.  Every sinew of my being wanted to melt this person who accidentally bumped into my sore spot. An arrhythmic chant of “I’M NOT GOOD ENOUGH!!” and “SEE ME!!” clashed together in dissonant harmony that vibrated down my spine. It is the feeling that I have dedicated my life to avoiding, but once that poison burns its way through my veins, I am locked in a promise I can’t escape. Because if thine is the glory than mine is the blame and I just can’t afford that.

The excitement I felt when I entered the doors crashed into the depths of my stomach. Giant waves of anxiety started slapping the banks of my gut. Suddenly my feet were no longer connected to the ground and my emotional equilibrium was staggering, unable to find balance. It happens that fast for me.

This bar manager had no idea that he had tripped the detonation sequence. Rationally, I can see that he was concerned about his staff and the optics of a middle-aged white guy, lurking around the premises with an iPhone camera, are not comforting in this age of middle age white dudes being sleuthed in every true crime podcast. However, there were plenty of context clues. I was wearing a Best Beer Near Me t-shirt and I was taking pictures of beer and pizza. Be that as it may, while I craved more goodwill, he is not responsible for my feelings. He has no obligation to regard them. I am a grown up. I can manage those matters myself. I just didn’t want to.

What I wanted was to blister this man with a flame thrower of humiliation. I wanted him to beg for forgiveness for making me feel what I didn’t want to feel. I feel no shame in looking through the peephole until I am noticed looking through the peephole. I wanted this to be a warning shot across the bow of anyone who dared to look unfavorably upon me. My mind wandered to vengeful fantasies of writing a revenge piece on my website and spending ad dollars to boost the volume. I wanted this man to cry uncle for his accidental crime.

There’s a Crack in Everything

Shame is a story. It masquerades as a strong emotion. Shame is a yarn I spin to myself that something is broken, that I’m not enough, that I am wrong and that being wrong is the worst of crimes. I invented this story long ago to protect myself from the raw emotions that exist under the bedrock of the tale. It is far easier for me to wage a self-protective campaign against an invented monster than it is to feel the feelings of raw fear and grief. Emotions so intense that they can separate me from consciousness. In the words of Nietzsche “He who fights with monsters should look to it that he himself does not become a monster.”

Perhaps it was the bar manager’s gaze itself that threatened to expose something that I disliked within myself. What he saw, was not what I wanted seen. I showed up to the brewery looking to reinforce an undermined sense of self and despite my internal protests to “BE SEEN” I wanted to control what WAS SEEN. The bar manager looked past the image and saw some cracks. The struggle is trusting that there is a crack in everything. Cracks are good. That’s how the light gets in.

My trip to Vector Brewing was sobering. The trip forced me to spend a little time with my shame and more importantly with my grief. The project of forgiveness is ongoing. Even though my mother died 9 years ago, the work of joining the wronged and the wrongdoer goes on and it becomes less and less clear who was who. I had a chance to stop by my mom’s grave and with meekened face and cold hands folded over a still heart, I considered the green threshold of our common grave. There was a common sorrow that connected us and perhaps for the first time I didn’t avoid it and instead embraced it.

My eyes swollen with shed and unshed tears cleared my vision of her humanity. My shame had blinded me of this clarity for far too long. It became clear that the purpose of my shame was to keep her alive through unresolved grudges. It was time to let her go. It was time to say goodbye. But how does one say goodbye to the first person who whispered hello.

The definition of Vector is the velocity of an object or the force acting on an object, that has magnitude and direction. Vector Brewing lived up to that and I’m trying not to hate them for it.

Texas breweries showed out at this year’s Great American Beer Festival. Brewers in Texas are producing…